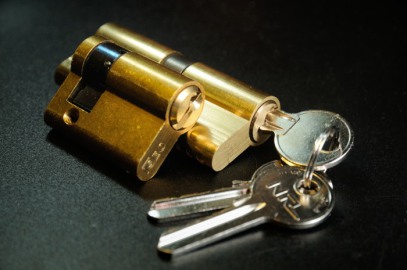 The Euro profile cylinder is in some ways like a 'Yale' lock, but upside down, as it is also a pin tumbler lock. The keys are usually the same but are put in the lock with serrated edge pointing down. It is unlike a 'Yale' in that these locks are used as a modular part of another locking mechanism which could be anything from a simple latch to a multipoint dead bolting arrangement such as found on some UPVC or composite doors. They are also what is used on many roller shutter switches.

I think it is pure design coincidence that from the outside these locks present a shape that looks a bit like the traditional lever (Chubb) lock keyhole.